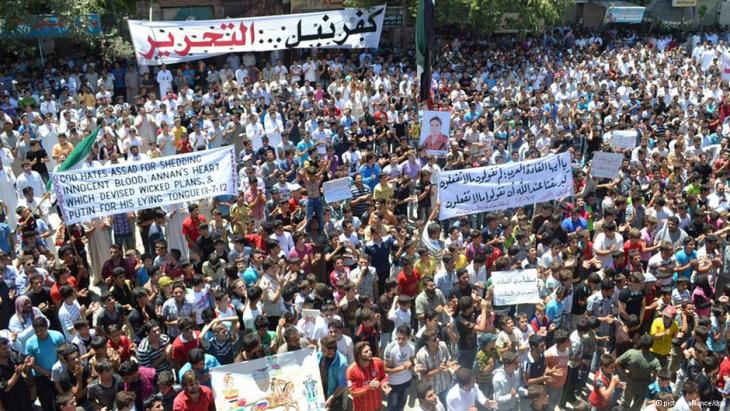 The German NGO "Adopt a Revolution"
Planning for a Postwar Syria

The Syria solidarity group Adopt a Revolution keeps a low profile, especially in Germany's capital city, where the Syrian government operates an embassy. "Syrian activists living here have been badly beaten up in their own homes," explains Andre Find, a polite, soft-spoken German around thirty, who works full-time for the NGO Adopt a Revolution.

Although there were no arrests, insiders are convinced the attacks are the handiwork of Syrian secret services. Moreover, not far from the run-down quarter of Berlin where the NGO has its home, there are clubs where Hezbollah supporters congregate.  Friends of the Assad regime, says Find.

That's why, in order to meet them, I first get a phone number and address from Adopt a Revolution via email.  On a chilly day, Find meets me out on the street in a worn sweater.  We head indoors to a ramshackle courtyard office with several young men hunched intently over laptops.

Opposition in the spirit of the Arab Spring 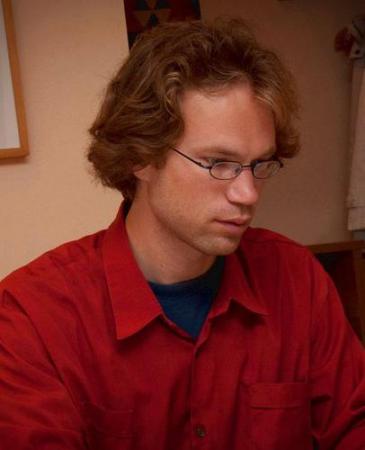 Advocating and supporting non-violent opposition in the midst of one of the world's fiercest war zones: Andre Find of 'Adopt a Revolution'

In fact, even though Adopt a Revolution doesn't advertise its office's whereabouts, the group itself is no secret – nor is it a supporter of any one faction in the fighting that engulfs Syria today. As its multi-language website attests, Adopt a Revolution is a protagonist for non-violent resistance in Syria, which models its opposition in the spirit of the Arab Spring.

Activists like Find, an online campaigner who has worked in Kurdish northern Iraq, were inspired by the Arab Spring and other successful pacifist revolutions, from Eastern Europe to the Occupy Movement.

How, I ask him, can there be non-violent opposition in the midst of one of the world's fiercest war zones? "It's gotten lost in the war's media coverage, but those who initially took to the streets in the tens of thousands against the Assad regime were students, young people, intellectuals, and families," explains Find. "This lasted 15 months."

In early 2011, local citizen's committees formed in opposition to the regime in almost every city and town across Syria. Their goal, explains Find, was a secular, democratic Syria based on human rights and the rule of law, much like that of their counterparts in Tahir Square in Egypt. "But there had been no civil society in Syria for 42 years," explains Find.

These structures were fragile and eventually, according to Find, they were marginalized by the armed struggle.

"But the committees and other non-violent grassroots groups still exist and they're active," says Find. "Their strikes, demonstrations, and creative protests are extremely valuable. They're working to keep Syria from falling into sectarian factionalism." Adopt a Revolution, he says, is backing "those forces that are trying to prevent an all-out civil war after the regime is finally toppled." These groups are also involved in local democratic reform, the delivery of humanitarian aid, the provision of medical services, and citizen journalism, among other activities.

A recent development is that in Syria's northern-most regions, committees are active against the growing influence of radical Islamists and jihadists. In the provincial capital of Raqqa, for example, there are protests against Islamic rule of law and in Menbej, in the province of Aleppo, activists are developing programs for children to steer them away from radical Islamist currents. 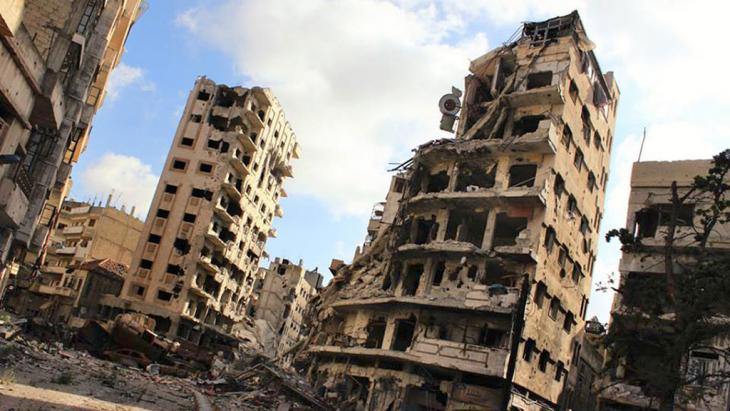 Democracy activism in times of war: Civil society structures in Syria were fragile and eventually they were marginalized by the armed struggle. "But non-violent grassroots groups still exist and they're active," says Andre Find of Adopt a Revolution

Adopt a Revolution is the brainchild of Elias Perabo, a German political scientist who was traveling through the country when the Syrian Spring, as he calls it, broke out in April 2011.  Perabo decided to stay and help the activists build a network with contacts to the wider world. The idea of Adopt a Revolution came to him in a discussion late one night in a club in Beirut.  In the fall of 2011, Perabo, together with Syrian and German activists, including Find, launched Adopt a Revolution to support peaceful resistance and plan for a democratic future in Syria.

Support for non-violent resistance in Syria

Adopt a Revolution's primary aims are two-fold: to bring the plight and hopes of the non-violent resistance in Syria to the international public, and to raise money to support the local committees still working on the ground.

The group's most innovative stratagem is a fund-raising device that enables private donors to make monthly contributions to a particular local citizen's committee or NGO in Syria. In the past, it has been possible to "adopt" via long-distance philanthropy an individual child in the developing world or a stuffed mammal in a natural history museum. Now donors interested in furthering Syria's democratic revolution can choose from nearly 30 possibilities on Adopt a Revolution's website. Just click the button "Donate" under your favorite initiative and have your credit card at the ready. The donations are even tax deductible.

One can then choose between local committees from Derlik in the country's northeastern-most corner to Al Yadudah along the Jordanian border, or the likes of the Union of Free Syrian Students in the university cities of Aleppo, Damascus, Homs, and Deir ez-Zor.

One option, for example, is the provincial town of Suwayda, 100 kilometers south of Damascus. Suwayda's majority is made up by Druzes, a Shia sect of Islam, which had been allied with the Assad regime until it began using force against the civilian population. Now Suwayda is part of the resistance and its activists need support. The involvement of groups with different ethnic and religious backgrounds is key to Adopt a Revolution's approach. 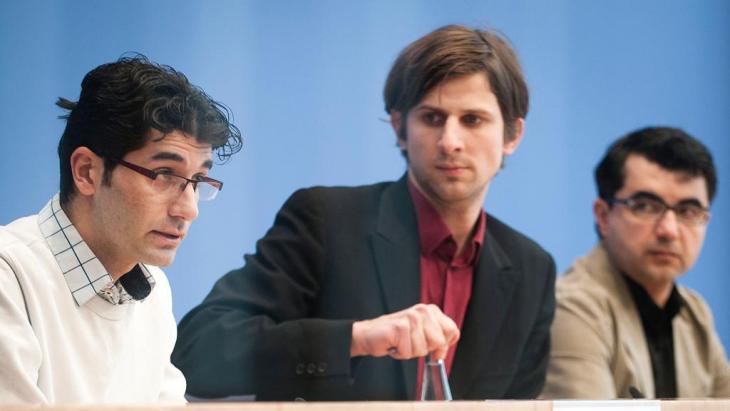 Funding the revolution: Elias Perabo, Founder of Adopt a Revolution, spends hours each day corresponding with the opposition, organizing donations and sharing reports from committees in Syria. Here, he is pictured with exiled opposition activists Hozan Ibrahim (l.) and Ferhad Ahma at German Federal Press Conference in Berlin

Each organization receives €650 to €950 a month from Adopt a Revolution. The organization provides the donors with regular, in-depth reports on their chosen group's activities.

"All of our donors are private individuals," says Find. "We don't want to give any credibility to the Syrian government's claims that the uprising is somehow funded by foreign governments." The group works together with a number of pacifist and citizen empowerment organizations but remains fully independent of them.

The funds go primarily to IT and communications equipment, as well as posters, other propaganda material, and in one Damascus suburb even a communal soup kitchen. The money is sent via couriers to the activists who buy what they need on the ground in Syria. So far, say the organizers, not a euro has gone missing.

The positive response to Adopt a Revolution surprised even its creators. It currently has 2,500 regular contributors (400 of whom are regular donors) who sent €500,000 to grassroots revolutionaries last year.

In light of the full-blown war, many of the citizen's groups are struggling just to stay alive. "Some of the committees are barely running because so many people have left the country," explains the lawyer Christine Schweizer of the Hamburg-based pacifist group The Federation for Social Defense, who also serves on Adopt a Revolution's advisory board. "We're always trying to assess what's working, what's not, and how to move forward."

Appeal to EU policy-makers: According to Adopt a Revolution, EU member states ought to be focusing on improving humanitarian aid and supplying internally displaced persons with aid

Schweizer believes that the time for non-violence resistance may still be to come. "It was a catastrophic decision to resort to arms in the first place," she says. The group's reports from the frontlines say that many Syrians are disillusioned with the armed struggle and the many different groups of radicals that are now part of it. Adopt a Revolution had long argued that arming the anti-Assad forces would only prolong the war and exacerbate the bloodshed, and that position hasn't changed in light of the EU's failure to renew their Syrian arms embargo.

Find, who has recently returned from a trip to Syria and the Turkish-Syrian border argues that "instead of delivering arms to the opposition forces, the EU member states would have much better options to support the uprising," above all "by focusing on improving humanitarian aid and especially supplying internally displaced persons with aid." European governments, says Find, are wrong to focus on military supplies. "There are many options in the humanitarian relief left to address" and many opportunities to support "unarmed activists – in Europe as well as in Syria."

As for German foreign policy in Syria, Find says that the "federal government isn't doing very much, but then it's also not doing much wrong." Adopt a Revolution, however, is pointedly critical of Germany's treatment of Syrian activists and regime-critical Syrian nationals living in Berlin. "Germany doesn't make it easy for these people," says Find.

In order to remain in Germany, they're forced to go through the tedious process of applying for political asylum and then live in an asylum center for at least six months. Syrian students whose passport extension applications are turned down by the Syrian embassy in Berlin must then also resort to the asylum process in order to stay in Germany.

"In the light of the latest developments, there is the urgent need to accept more refugees from Syria. This is something the German government could easily do," says Find.

"We want to help the people committed to a secular civic society be empowered so that one day they can build their own state," says Find. "They've risked so much that there's no going back. They're the future of a democratic Syria."

The Kurds are under attack from two sides: from Turkey, and from Iran. The situation in their territories in northern Iraq is becoming increasingly desperate. Birgit Svensson ... END_OF_DOCUMENT_TOKEN_TO_BE_REPLACED

More than 300 children in rebel-held northwest Syria kicked off their own football World Cup on Saturday, with organisers hoping to shine a light on communities battered by 11 ... END_OF_DOCUMENT_TOKEN_TO_BE_REPLACED

Lamya Kaddor, MP for Germany’s Green Party, visited Qatar with a group of parliamentarians. In interview with Claudia Mende, she advocates a differentiated picture and urges that ... END_OF_DOCUMENT_TOKEN_TO_BE_REPLACED

Arabs in the German capital? For many, this means criminal clans. Yet the city is home to a vibrant intellectual scene. Exiles from Syria, Palestine and Egypt are gathering to ... END_OF_DOCUMENT_TOKEN_TO_BE_REPLACED

After a two-year hiatus, the Arab League re-convened at the beginning of November in Algiers against a backdrop of uncertainty and discord. By Pierre Boussel END_OF_DOCUMENT_TOKEN_TO_BE_REPLACED

In the run-up to the COP27 global climate summit, hosted by Egypt in November, it is worth noting that little rainfall, aggressive heatwaves and worsening drought make the Middle ... END_OF_DOCUMENT_TOKEN_TO_BE_REPLACED
Author:
Paul Hockenos
Date:
Mail:
Send via mail

END_OF_DOCUMENT_TOKEN_TO_BE_REPLACED
Social media
and networks
Subscribe to our
newsletter