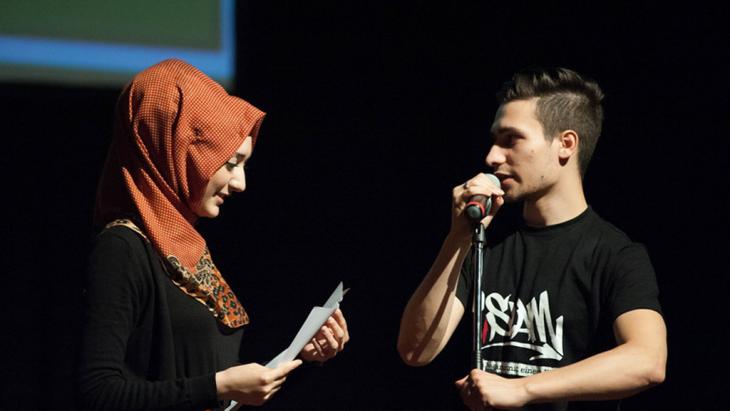 The Five Pillars of i,Slam

Youssef Adlah and Younes Al-Amayra initiated the first Poetry Slam for Muslims in Germany. In it, respect for religion must be maintained – no matter what the theme. In this interview, the initiators talk about how their Muslim poetry slam can empower the Muslim community

Youssef Adlah, Younes Al-Amayra, poetry slam was invented in the mid-1980s in the United States. In 2011 you staged the first Muslim poetry contest. Why?

Younes Al-Amayra: Youssef appeared at a slam in Kreuzberg; he recited a satirical text about Germany's majority society. The audience had fun, the message came across, and Youssef made second place. For us it was a realization: you can make any criticism you like; it's all a question of how it's packaged. We asked ourselves why so few Muslims make use of this platform and had the idea that it was probably the concept: most slams are held in bars and religious texts tend to be sneered at. 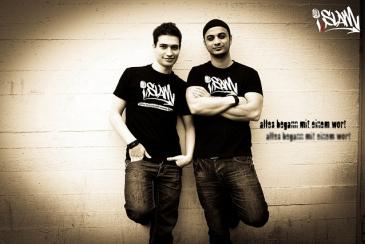 "You can make any criticism you like; it's all a question of how it's packaged." - Youssef Adlah (left) and Younes Al-Amayra

Youssef Adlah: Moreover, poetry slam is a man's domain. Girls often feel uncomfortable going on stage, all the more so with a headscarf. So with i,Slam we sought to create a framework in which Muslims could give poetry slam a try. After one or two appearances at i,Slam, they can say: OK, I'm confident enough now to try it at another stage. The idea of empowerment is important to us.

How does i,Slam differ from other slams?

Al-Amayra: Our slams don't take place in bars but at neutral venues like the Academy of Arts in Berlin or the Thalia Theater in Hamburg. No alcohol is served. And we have five rules, the "Five Pillars of i,Slam": every poet must be treated with respect, the texts must be written by the poets themselves, props aren't allowed on stage, everyone has six minutes' time – these four rules don't differ from those of other poetry slams. Only the fifth rule is different and is important to us: we don't want any four-letter words or insults.

"The Islamic framework must be respected" – that's the wording at the i,Slam website…

Al-Amayra: No matter what the theme, respect for religion must be maintained – respect for all religions.

Adlah: We don't ban any theme as long as it's formulated reasonably. You can say "die" or you can choose an insulting word for it: we prefer the non-derogatory words. We don't think people should insult each other – with insults you don't reach anyone. And we want to reach people. 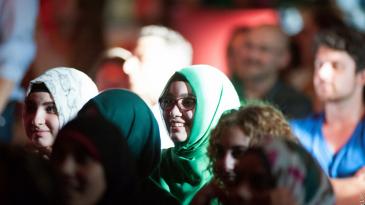 "No matter what the theme, respect for religion must be maintained – respect for all religions." - The audience a one of the i,slam shows

Have there been cases when you had to intervene?

Adlah: Up to now there's been only one violation of the rules on stage: someone called for a "Boo for Merkel". That's a direct attack on a person, and we don't want to attack anyone. Satire is fine, but it shouldn't be offensive. Then it's penalized.

Do you make exceptions or really only Muslims allowed to perform?

Al-Amayra: i,Slam is a platform for Muslims and only Muslims appear on the stage. The audience of course is mixed. But we also want to come into contact with other religions and have therefore founded another poetry slam: i,Slam–we,Slam!, where non-Muslims are also welcome. At the first event there were Jews, Christians and Bahais; at the second, Muslims, Jews and Christians. And at the next even atheists will take part.

How do you get in touch with the slammers or they with you?

Adlah: They apply by sending us two texts. We don't make a qualitative selection, but we check how the texts are written – whether they contain swear words or insults. 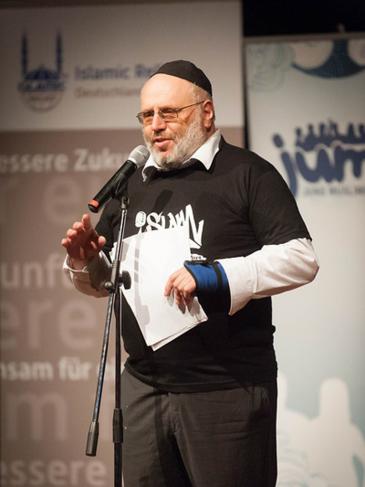 Muslims, Jews and Christians on the same stage: Rabbi Walter Rothschild at one of the we,slam shows

What themes are treated on stage? Can you make out tendencies?

Al-Amayra: In the beginning it was often about discrimination. Especially in texts by women slammers who wear the headscarf. There was a lot about religion, but there were also funny texts. Now the themes are very mixed: there are love poems, one slammer wrote about his trainers and our slamming imam recited a text that was very boldly entitled The Hate Sermon and pulled the leg of the Muslim community.

Is i,Slam a political stage?

Adlah: i,Slam is a stage for art. But for me art is relevant only when it contributes something to social education, and that means in turn to be politically active. So we're a stage for art that actively participates in socials themes.

Al-Amayra: i,Slam wasn't founded to be political – but on the stage it can sometimes get political. It's important to us to send signals that stimulate the audience to reflection.

At your website you describe i,Slam as "an opportunity to change something through words". What has changed in the two years?

Adlah: I think that we've changed a lot. We've succeeded in making poetry slam known and popular in the Muslim community – over forty Muslim slammers, more the half of whom are women, have performed at i,Slam. With i,Slam–we,Slam! we've established an inter-religion dialogue and with both slams we've reached the German public. The opportunity now exists to enter into the mind of a Muslim young person while he or she speaks from the heart on stage.

Youssef Adlah, born in 1989, studied aeronautical and aerospace engineering at the Technical University in Berlin. He has lived in Germany for fourteen years and been writing his own texts for the last twelve. He appears regularly at i,Slam. The texts of the Syrian-born slammer treat the situation in his homeland.

Younes Al-Amayra, born in 1986, studied Islamic Studies, political science and public law and is currently working on his doctoral dissertation. Younes was born and grew up in the German Democratic Republic and is especially interested in politics. The theme of his most recent text: Islam Is Part of Germany.

Home
Print
Newsletter
More on this topic
Young Muslims in Germany: Taking a Stand for SocietyIslamic Streetwear from the German ''Styleislam'' Label: Modern, Rebellious, and HalalMuslim Bloggers in Germany: Creating a Counter-public to Traditional Media
Related Topics
Dialogue of Cultures | Intercultural Dialogue, Islam and the West, Islam in Germany, Islamic lifestyle, Muslims in the West
All Topics

One in four people in Germany has a migration background, but less than 8% of the members of parliament have foreign roots. Germany is out of touch with reality, says Maissun ... END_OF_DOCUMENT_TOKEN_TO_BE_REPLACED

Germany’s electorate includes some 7.4 million citizens with international roots, while many more millions of residents from abroad aren’t allowed to vote. Both groups are often ... END_OF_DOCUMENT_TOKEN_TO_BE_REPLACED

Germany's foreign policy is explicitly values-based. But what happens, Ralf Bosen asks, when democracy, the rule of law and human rights collide with the logic of trade and ... END_OF_DOCUMENT_TOKEN_TO_BE_REPLACED

No other Western poet was arguably so well-versed in the Koran or so fascinated by Islam as Germany's national hero, Goethe. In a new publication that examines all Goethe's ... END_OF_DOCUMENT_TOKEN_TO_BE_REPLACED

Migrants are often maligned as being responsible for Europe's problems. Yet their integration is in Europe's interest. Michael Thaidigsmann believes that a long-term vision is ... END_OF_DOCUMENT_TOKEN_TO_BE_REPLACED

How could the Afghan government and its institutions collapse so quickly? That things were going wrong in Afghanistan had been obvious for a long time, yet the West preferred to ... END_OF_DOCUMENT_TOKEN_TO_BE_REPLACED
Author:
Barbara Teichelmann
Date:
Mail:
Send via mail

END_OF_DOCUMENT_TOKEN_TO_BE_REPLACED
Social media
and networks
Subscribe to our
newsletter