Since the violent explosion in Beirut in early August, Lebanon has found no peace. Ever more Lebanese want to leave the country. With her bags packed, Cindy Chemaly Cochrane says she no longer wants to live in fear. By Diana Hodali END_OF_DOCUMENT_TOKEN_TO_BE_REPLACED

One month after the Beirut port explosion: "We sweep trauma under the carpet and carry on"Lebanese protesters call for systemic change: What now for Beirut, once the Paris of the Middle East?Aftermath of the Beirut explosion: Lebanon, a state in freefall thanks to corrupt governance

This 11 September marked the nineteenth anniversary of the terrorist attacks in New York and Washington. The wide-ranging repercussions of those attacks in the years since 2001 are only just emerging. Throughout the coronavirus crisis, political patterns born of the era of terrorism continue to prevail. An essay by Stefan Weidner END_OF_DOCUMENT_TOKEN_TO_BE_REPLACED

Politics, inequality and a lack of transparency: Coronavirus and the Middle East's ongoing state of emergencyCoronavirus and the kafala system: Gulf migrant workers fear for their post-pandemic futureInterview with Islamic scholar Stefan Weidner: Thinking outside the Western box

With the arrival of thousands of Tunisian refugees in Italy, the Italian government is putting increased pressure on Tunisia and wants to extend its deportation deal with the small country. A Tunisian NGO is calling for transparency. Sofian Philip Naceur reports from Tunis END_OF_DOCUMENT_TOKEN_TO_BE_REPLACED

Clandestine migration from Tunisia: Flight of the hopelessTunisia's ″Cemetery for the Unknown″: The gravedigger of ZarzisTunisia and the EU: Bolster the young democracy!

After the devastating fires in the Moria migrant camp on Lesbos, Muhammad spent days on a sealed-off section of road with thousands of others. His most fervent wish is to leave the island, as Max Zander reports END_OF_DOCUMENT_TOKEN_TO_BE_REPLACED

Greece and the asylum-seekers: How do you solve a problem like Moria?Refugees don’t have to be grateful; they have no debt to repayRefugees and migration in the Aegean: The EU and Turkey need each other – and a new refugee deal

When hundreds of thousands of refugees crossed Germany's borders in 2015, Chancellor Angela Merkel promised: "We can do it!" This is the story of how Iraqi refugee Raisan Hameed became a successful photography student. By Nader Alsarras END_OF_DOCUMENT_TOKEN_TO_BE_REPLACED

Syrian refugees in Germany five years on: Samer Serawan's Damascus Aroma – a taste of integrationSyrian writer Widad Nabi: ″Integration is the search for common ground″Refugees in Germany: Working through the trauma

Refugees are expected to show gratitude and humility towards the country that has taken them in. In her new book, "The Ungrateful Refugee", Dina Nayeri sets out why this is a wholly misguided assumption. By Gerrit Wustmann END_OF_DOCUMENT_TOKEN_TO_BE_REPLACED

Refugee crisis on the Greek-Turkish border: Europe's liberal warriors put democracy to the swordGreece and the asylum-seekers: How do you solve a problem like Moria?The integration litmus test: Success for some means failure for others

Five years ago, Samer Serawan spent many long, cold nights in a muddy courtyard in Berlin, one of many Syrians who queued up to live in Germany. Now he has a successful restaurant that promotes integration. Ben Knight reports END_OF_DOCUMENT_TOKEN_TO_BE_REPLACED

In Lebanon, collective trauma is obvious. The explosions in Beirut on 4 August will have triggered memories of the civil war in many people. By understanding how individual and social identities are influenced by the past, peace work can help contribute to the healing process. By Miriam Modalal and Dalilah Reuben-Shemia END_OF_DOCUMENT_TOKEN_TO_BE_REPLACED

Morocco officially declared itself a country of immigration in 2013, responding to the growing number of immigrants arriving from sub-Saharan Africa. Since then, tens of thousands of illegal aliens have been given residence permits, making them legal residents of the country. Despite this progress, however, Morocco's immigration policies remain inconsistent, and society has yet to truly accept the newcomers. By Claudia Mende END_OF_DOCUMENT_TOKEN_TO_BE_REPLACED

Twelve million Syrians are dependent on humanitarian aid, a sombre figure that conceals much suffering and high costs, of which Europe bears 80%. With an aid shortfall looming, the EU is mobilising donations and counting on civil society. Christian Hanelt argues that Brussels must take a stronger stance politically if the suffering is to stop END_OF_DOCUMENT_TOKEN_TO_BE_REPLACED

Ending the civil war: For a different SyriaThe destruction of Idlib: "I'd rather suffer bombs than Assad"Fighting for democracy and a free Syria: "Ideas cannot be killed with weapons" – remembering Raed Fares

Mikhal Dekel’s father was part of a contingent of Jewish children who went on an odyssey from Poland to Iran as a result of the Holocaust. Dekel has now written a book exploring the story of the "Tehran Children". By Daniel Walter END_OF_DOCUMENT_TOKEN_TO_BE_REPLACED

The Islamic Republicʹs Jewish minority: Celebrating Sabbath in IranUneasiness among Iran's Jews: The dilemma of Choosing between integration and emigration″Haymatloz″ – a film documentary: How Ataturk rescued the Jews

In the age of corona, Ankara's regional power strategy is twofold: on the one hand, Turkey is engaged in a charm offensive to revamp its political image, which has suffered lately in certain quarters. On the other, President Erdogan is pursuing a tough policy of interests backed up by military force. By Ronald Meinardus END_OF_DOCUMENT_TOKEN_TO_BE_REPLACED

A truly international conflict: How can Europe help prevent the carving-up of Libya?Conflict in North Africa: In Libya, Russia sinks its teeth into another proxy warLibyan civil war: EU divisions over Libya leave a gap for others 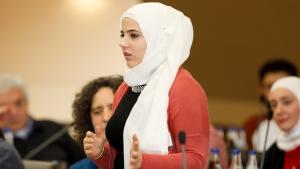 Twenty-five Syrian refugees were accepted onto a one-year trainee programme in municipal administration with seven German local authorities. As it turns out, the Syrians were not the only ones to benefit. Claudia Mende reports END_OF_DOCUMENT_TOKEN_TO_BE_REPLACED

The integration litmus test: Success for some means failure for othersSyrians in Germany: Writer Widad Nabi: ″Integration is the search for common ground″Qantara dossier: Integration in Germany

Jordan is not only waging a vigorous battle against coronavirus, but also against the Middle East peace plan proposed by U.S. President Donald Trump. By Birgit Svensson END_OF_DOCUMENT_TOKEN_TO_BE_REPLACED

With the first COVID-19 case having been detected in the Kutupalong Rohingya refugee camp in Bangladesh, aid agencies are warning that without additional resources, there will be a public health catastrophe. By Rodion Ebbighausen END_OF_DOCUMENT_TOKEN_TO_BE_REPLACED

Bangladesh locks down Rohingya refugees' district amid pandemicCox's Bazar, Bangladesh: Fatima, the Rohingya, tells her storySyrian refugees in Lebanon: More scared of starving than of coronavirus

With social distancing impossible in tents, a coronavirus outbreak in one of Lebanon's Syrian refugee camps would quickly turn catastrophic. Yet, many Syrians have more existential fears than those posed by the virus. Diana Hodali reports END_OF_DOCUMENT_TOKEN_TO_BE_REPLACED

‘We’re afraid of tomorrow’: Syrian refugees face hunger and poverty amid coronavirus downturnsPolitics, inequality and a lack of transparency: Coronavirus and the Middle East's ongoing state of emergencyFemale protesters in Lebanon: Solidarity is the solution!

END_OF_DOCUMENT_TOKEN_TO_BE_REPLACED
Social media
and networks
Subscribe to our
newsletter