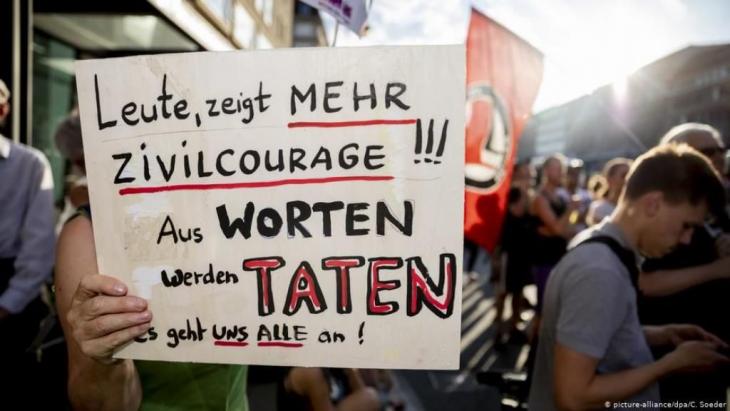 Attacks on people perceived as different – such as Jews or Muslims – are on the rise in Germany. Enough is enough. We need more than declarations of solidarity, write Jewish rabbi Yehuda Teichtal and Muslim SPD politician Raed Saleh in their joint appeal

A couple of weeks ago I, Rabbi Yehuda Teichtal, and my child were spat at in the street and abused in Arabic because we are Jews. Precisely a year ago, a neo-Nazi mob raged outside the "Schalom" restaurant in Chemnitz, throwing stones and shouting hate-filled slogans.

Shortly before Christmas 2017, a well-dressed elderly man harassed a Jewish restaurateur in Berlin-Schoneberg with the words: "What is there for you here after 1945?" Followed by the intolerable sentence: "You should all get back to your damned gas chambers." Not long ago in the Berlin district of Prenzlauerberg, a Syrian refugee used a belt to whip a Jewish man because he was wearing a kippa.

All these incidents were horrendous and elicited a public outcry. There was thorough reporting, candlelit vigils, minutes of silence, declarations of solidarity. Then nothing until the next incident occurred. We need to be wary of not falling into a predictable cycle.

In a democracy, it is of course important and absolutely essential that society takes a stand and shows its disapproval. It did a lot of good that the German President had a clear message in response to the terrible occurrence of last week. He is right when he says that any form of extremism is toxic for our open and libertarian society. But words alone are simply not enough.

In Germany at the present time, attacks are taking place daily on people because they are perceived to be different. By anti-Semites, racists, xenophobes, homo- and Islamophobes. Just like the Jews, Muslims are also being continually harassed, marginalised and abused everywhere. Kippas and headscarves are being torn from heads. Because of deep-seated prejudices. Enough is enough. We need more than declarations of solidarity reeled off regularly and left without consequence.

You may also like: Beware of "anti-Semites in Armani suits"

We need an uprising of the upstanding

We need a strategy on how we want to deal with increasing levels of rejection of those perceived to be different and unfamiliar. We need a daily uprising of the upstanding. In workplace canteens, in soccer clubs, in conversations after church services, on the tram, in the beer garden. Whenever someone tells a crass joke about Jews, Muslims or refugees, tipping out his offensive prejudices like a bucket of manure, when the Roma boy begging on the street is threatened, or the woman sitting next to us on the bus is abused because she's wearing a headscarf, when Jewish boys are mobbed for wearing a kippa, then the only response can be to stand up and contradict such actions. 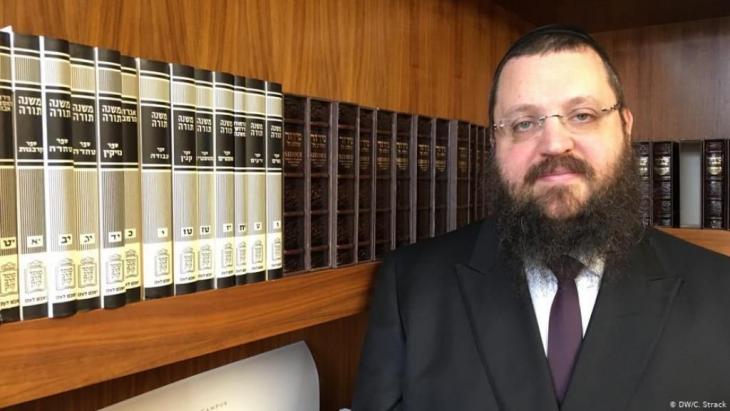 The European Rabbis Conference sees "religious co-existence in Germany" and freedom of religion threatened. Rabbi Yehuda Teichtal, accompanied by one of his children, was insulted and spat on by two Arabic-speaking men at the end of July in Berlin. The attack was met with horror nationwide. Investigations by the police are ongoing

The agitators will only feel bolstered if they believe someone is following them. Should they encounter a headwind, they quickly fall silent. It is always easy to single out individuals from a group for abuse. But if an entire train carriage stands up and shows that the hatred and the attacks will not be tolerated, then this will have an effect. Yes, such actions require courage. But we must finally summon up that courage.

The spitting and the insults just a few days ago in Berlin was not an attack on the Jewish father with his child –  it was an attack on our open society. It was an attack on the gay couple, on the Muslim imam, the paraplegic in a wheelchair, on the vibrantly-coloured punk, the black female soccer player, the homeless Roma family, the little refugee boy without parents living with a foster family.

Live out the values of the constitution

What unites us all is our Basic Law – our values, our morality and our responsibility before God. Finger-wagging alone will not help. And neither will harsh punishments for the repugnant agitators. We need a change of mindset. A change of mindset through a broader-based co-existence.

We need to start the process at a very early age. Those who don't want Islamists, anti-Semites, neo-Nazis and left-wing radicals must begin, in the presence of the youngest members of the community, to live out the values of our constitution and the benefits of a diverse, vibrant, open and also international society. We need to pay much more attention to education, a tolerant, democratic education. From the kindergarten right through to the college of adult education.

You may also like: Jews - the AfD's means to an end

One-and-a-half years ago I, Raed Saleh, proposed on this very website the historic rebuilding of a synagogue for the first time in German history. As a sign of how central Judaism once was in Germany and as an indication of where we are again today. That article has in the meantime given rise to a very concrete project reported on from Washington to Tokyo and well on the way to being realised very soon. 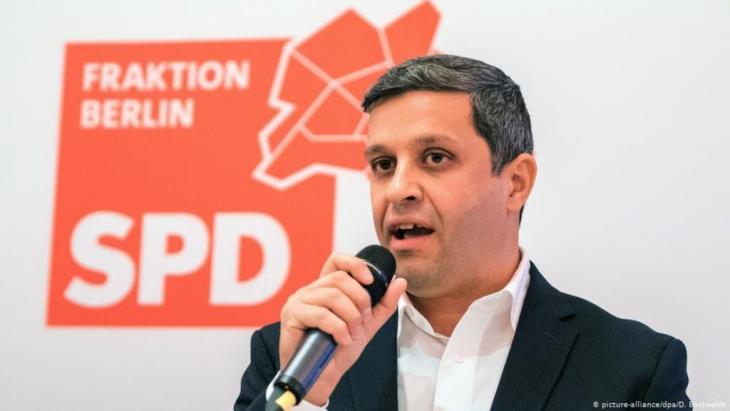 A unique project in Germany: Raed Saleh, chairman of the SPD in Berlinʹs local parliament, is committed to the reconstruction of the synagogue destroyed by the Nazis in Berlin-Kreuzberg. "As a sign of how central Judaism once was in Germany, and as a sign of where we are again today"

The first two million euros have been raised. Several Berlin mosques announced they would be collecting donations for the reconstruction. From the Jewish perspective, a moving gesture. The complex will also include a kindergarten, in which Jewish children will play together with Muslim and Christian children, as well as children of no faith, and together learn the wonderful values of our constitution.

Just as on the Jewish Campus currently being established in the Berlin district of Wilmersdorf. Together we have both campaigned for many years to ensure that this important project can flourish and that it will soon become a reality. A figure in the tens of millions of Euros has thus been amassed, the foundations have been laid. We still need another six million euros, but the project is nevertheless growing by the day.

Very soon on the Campus, young people from different countries representing a variety of religions will come into contact with each other, study, play and pursue sports together. This is the only way coexistence can arise from difference – through encounter, dialogue and exchange.

Almost 80 years after the Holocaust, very few of those who experienced this human catastrophe are still with us. We owe it to them at least to do more than follow terrible deeds with nothing but words and gestures. Let's make a start today!

The protests against police violence in the USA have triggered a discussion in Germany about discrimination, immigration and the country's image of itself. Why are people who do ... END_OF_DOCUMENT_TOKEN_TO_BE_REPLACED

Journalist Michel Abdollahi was born in Tehran in 1981 and moved to Hamburg in 1986. His big breakthrough came with his television documentaries on social issues such as ... END_OF_DOCUMENT_TOKEN_TO_BE_REPLACED

From Syrian war crimes to U.S. hypocrisy in the Julian Assange case, the global "erosion of human rights standards" is of critical concern, UN Special Rapporteur on Torture Nils ... END_OF_DOCUMENT_TOKEN_TO_BE_REPLACED

Iran’s contemporary poets are less well known in Germany than the old Persian classics. Kurt Scharf has now translated 32 of them into German. Marian Brehmer dipped into the ... END_OF_DOCUMENT_TOKEN_TO_BE_REPLACED

The Sudan Partnership Conference on 25 June is seeking funding commitments to rebuild Sudan’s desolate economy. As Annette Weber argues, the crucial point will be aligning ... END_OF_DOCUMENT_TOKEN_TO_BE_REPLACED

END_OF_DOCUMENT_TOKEN_TO_BE_REPLACED
Social media
and networks
Subscribe to our
newsletter