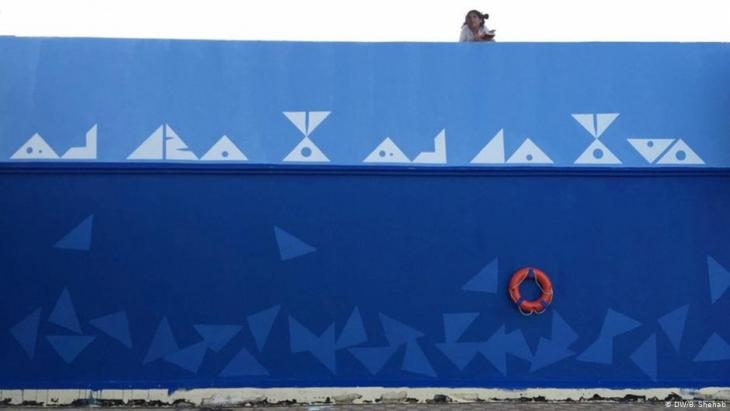 In his "West-Eastern Divan" published 200 years ago, Goethe promoted the idea of cultural proximity between Orient and Occident. The festival "A New Divan" in Berlin aimed at revisiting his idea. By Grzegorz Szymanowski

Guillem Palomar spent four months working on his piece. Four months, all for just eight minutes, the duration of the 22-year-old composition student's setting of Johann Wolfgang von Goethe's poem "Wo hast du das genommen" (lit. 'Where did you get this?') from the collection "West-Eastern Divan." In it, Goethe described a circling, nomadic pulse of life, through "an immeasurable distance / In an ocean of stars," which fascinated him and made him feel "as if newly-born."

"For me, this means that you find yourself not within your own comfort zone, but by running out of it and getting lost," says Palomar.

The fascination for the unknown is a similarity he sees between Goethe and the famous 14th-century Persian poet Hafiz. It was the reading of Hafiz's poems that moved Goethe to write his own "Divan" – the term stands for "oriental poetry collection" — between 1814 and 1819. Germany's most famous man of letters went as far as describing the Persian author as his "twin brother in spirit." In his view, East and West were two sides of a coin: "The Orient and the Occident can no longer be separated."

In the tradition of Goethe

Two hundred years later, calls for a separation from the Islamic world are growing louder in Western countries. That a young composer today would dedicate himself to the relationship of Goethe and Hafiz is an outcome of the festival "A New Divan", held last week at the Barenboim-Said Academy in Berlin. With lectures and panel discussions, an exhibition and concert, the events sought to revive Goethe's idea of an artistic dialogue between East and West.

Named after the famous Israeli pianist Daniel Barenboim and the deceased Palestinian literary critic Edward Said, the Barenboim-Said Academy itself stands in the tradition of Goethe's work. Twenty years ago, Barenboim and Said founded the West-Eastern Divan Orchestra made up of young Israeli and Palestinian musicians: an artistic peace initiative in spite of the Middle East conflict. 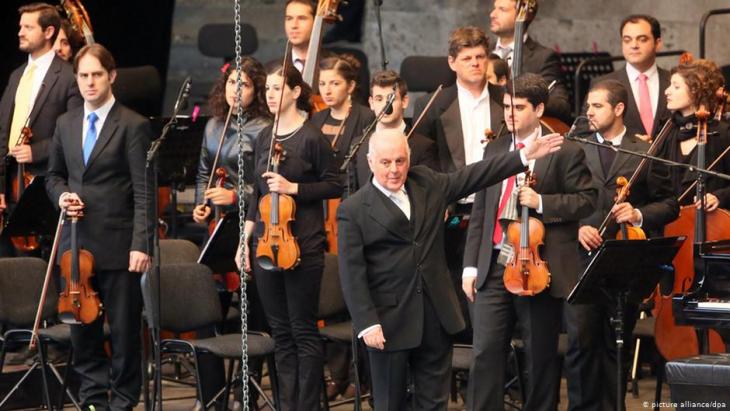 Among the musicians trained at the academy in Berlin since 2016 is Guillem Palomar. The world premiere of his piece In the Ocean of the Stars at the end of the festival was given by two young Divan orchestra members, a baritone and the 77-year-old Daniel Barenboim himself. The event also included music by Johannes Brahms and Robert Schumann.

The German edition of the book "A New Divan" was also presented at the festival, for which 12 poets from West and East respectively wrote poems for each of the 12 motifs of Goethe's Divan. They include well-known names such as the Syrian poet Adonis and Durs Grunbein from Germany.

After being invited to participate in the project, the 53-year-old Egyptian poet Iman Mersal, now living and teaching in Canada, re-read Goethe's Divan, but remained unimpressed by the idea of ​​dialogue through art.

"I was overwhelmed by the complexity of West-Eastern relations and doubted whether poetry could contribute to fixing them," explains Mersal. "For me, poetry is very personal and deeply rooted, I do not buy the idea of ​​dialogue initiated by a book." She also feels that it is not the task of artists to represent political ideas, so her contribution to the book is a poem about love. 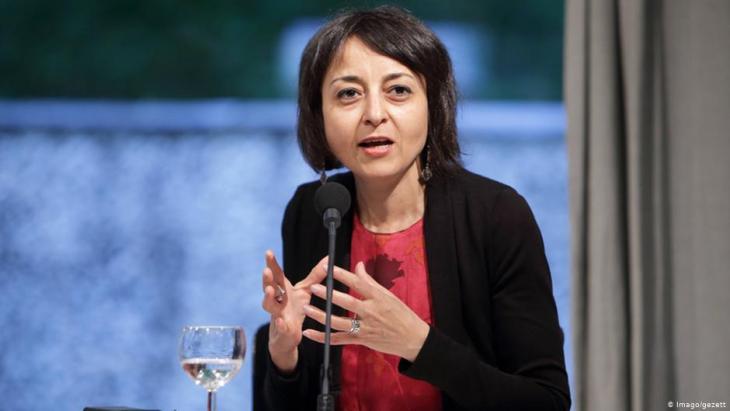 The 53-year-old Egyptian poet Iman Mersal, now living and teaching in Canada, re-read Goethe's Divan, but remained unimpressed by the idea of dialogue through art. "I was overwhelmed by the complexity of West-Eastern relations and doubted whether poetry could contribute to fixing them," explains Mersal. "For me, poetry is very personal and deeply rooted, I do not buy the idea of dialogue initiated by a book"

Mersal's scepticism seems understandable; Goethe's work never became popular. As the Islamic scholar Stefan Weidner remarked in his recently published "1001 Buch. The Literatures of the Orient", Goethe had "mutated with his Divan into the patron of a west-eastern reconciliation actionism". The book was often mentioned, but rarely read. It is often mentioned in gestures of reconciliation but rarely read.

"A New Divan" also seems to appeal to a rather narrow, literary-interested audience. The smart premises of the new Barenboim-Said Academy in the centre of Berlin were well filled with students and culturally savvy audiences. "I live in Neukolln (Ed: a Berlin district heavily populated by migrant communities) and do not know how this event could reach my neighbours," said Ali, a 29-year-old PhD student.

In contrast to her initial scepticism, Iman Mersal sees the added value of the festival in the gathering of poets who would otherwise not meet: "By reading poems and getting to know the others personally, I can deal with this controversial topic, reconcile and let it go a bit." Mersal adds, "We need to value and use such opportunities, because otherwise we cannot even pretend that East and West can be brought together."

The biggest difference to Goethe's times is that today, direct exchange is possible, says Stefan Weidner, one of the translators of the "New Divan". Goethe himself had no contact to living Islamic culture. Hafiz's poems were already over 400 years old when Goethe wrote his answer to them. "It was an imaginary dialogue with a dead man, by whom Goethe was inspired, but from whom there was no echo," says Weidner.

For many European artists, on the other hand, the East has long been seen in the light of a supposed Western superiority. That "oriental question" cleared the way for colonialism. The willingness of Western literature to look beyond its own nose must also be questioned today, when Nobel Prizes for Literature go primarily to Western writers.

"Today we must maintain contact with living Islamic culture and take it seriously as a partner in dialogue," warns Stefan Weidner. That means: listen, translate as faithfully as possible and enter into discussion. Weidner is certain: "If we do this with the same interest as Goethe did back in his time, we will do it right." According to Weidner, a new kind of world literature is being created by those writers who venture across borders and seek answers to questions not confined to their own regions.

The exhibition of the Cairo-based Lebanese artist Bahia Shehab showed that this intercultural enterprise need not be confined to literature. On walls around the world, Shehab paints quotes from poems by the Palestinian lyricist Mahmud Darwish. With them, she intends to illustrate a common human destiny. On the Greek island of Cephalonia she drew attention to the tragedy of dead refugees. "Those who have no land have no sea" are the words by Darwish she quoted in Arabic script, the letters arranged to suggest sinking ships.

Composition student Guillem Palomar takes a similar view. At its core, he says, cultures and religions, such as Christianity and Islam, are very similar. "Art is there to symbolically express this similarity," he says. Coming from Spain, where Jews, Christians and Muslims lived peacefully side by side for centuries and where Jewish mystics wrote in Arabic, Palomar adds, "I believe that art is greater than the egocentrism that separates us."

On the final evening of the festival, as cellist Astrig Siranossian and horn player Ben Goldscheider of the West Eastern Divan Orchestra, together with baritone Michael Volle and Daniel Barenboim at the piano, performed Palomar's mysterious, atonal, slowly building composition, it was a claim that seemed to have been fulfilled – at least for eight minutes.

Home
Print
Newsletter
More on this topic
Goethe anniversary: Orient and OccidentInterview with Daniel Barenboim: "The world is suffering from a lack of leadership"Father of post-colonial studies: Edward Said – exiled between cultures
Related Topics
Adonis, Art, Daniel Barenboim, Dialogue of Cultures | Intercultural Dialogue, Edward Said, History of the Near and Middle East, Islam and the West, Musical worlds, Places of Dialogue
All Topics

Iranian author Fariba Vafi is adept at describing everyday scenes and concealing within them something ambiguous, in parts strange and grotesque. She writes novels – which have ... END_OF_DOCUMENT_TOKEN_TO_BE_REPLACED

Her grandparents are Jews – born in Tunisia and Algeria. Director Cleo Cohen has now broken the silence about this with a very personal debut. By Nadine Wojcik END_OF_DOCUMENT_TOKEN_TO_BE_REPLACED

Life imprisonment for crimes against humanity: that was the sentence handed down to Anwar Raslan in the world's first trial of a member of the Syrian torture system. Matthias von ... END_OF_DOCUMENT_TOKEN_TO_BE_REPLACED

Every year in December, the team at Qantara.de takes a look back at the articles that proved most popular with our readers. This year is no different. Here is a run-down of the ... END_OF_DOCUMENT_TOKEN_TO_BE_REPLACED

With his new album, "A Voice Keeps Calling Me", the Persian santur player Kioomars Musayyebi is building bridges from Iran across the Arab world to European early music. By Stefan ... END_OF_DOCUMENT_TOKEN_TO_BE_REPLACED

Former lawyer Said Haider has invented a chatbot for those seeking advice on anti-discrimination issues – Meta is the first chatbot of its kind in the world. In conversation with ... END_OF_DOCUMENT_TOKEN_TO_BE_REPLACED
Author:
Grzegorz Szymanowski
Date:
Mail:
Send via mail

END_OF_DOCUMENT_TOKEN_TO_BE_REPLACED
Social media
and networks
Subscribe to our
newsletter