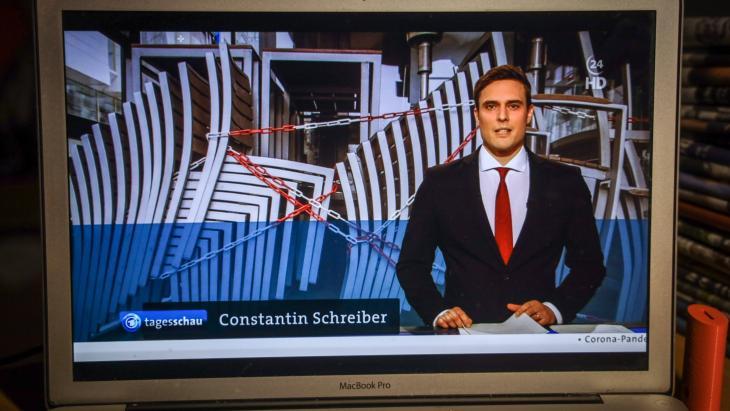 Having already published a number of non-fiction books on the subject, German news anchor and journalist Constantin Schreiber has now written a novel that warns what could happen if Islamists are allowed to march unimpeded through German society. Stefan Buchen read the book

Truth be told, this book is not worth the paper it is written on. However, the author's prominence and stature in German society means it cannot be dismissed that easily. Earlier this year, Constantin Schreiber joined the select circle of journalists who read the news on "Tagesschau", the most watched evening news bulletin on German television. In short, he is very well known.

This certainly won't do sales of his novel, "Die Kandidatin" (English: the candidate), any harm. In contrast to his non-fiction books "Inside Islam" and "Kinder des Koran" (English: children of the Koran), in which he made his viewpoints crystal clear, Schreiber needed to make up a story for his Islam novel. He has quite obviously taken a leaf out of French author Michel Houellebecq's 2015 novel "Submission" (French title: "Soumission"), which imagines a future France ruled by a Muslim president.

Schreiber has played down Houellebecq's influence in an interview, but the parallels are striking. Schreiber has, of course, set his story in Germany, and the "candidate" in the novel's title is a Muslim woman hoping to become German chancellor.

In Schreiber's vision of the future – set 15 years from now – Sabah Hussein is a candidate for the "Ecological Party" and has a very good chance of becoming Germany's next chancellor. In the Germany of Schreiber's novel, so-called "diversity characteristics" are all-important. Hussein's steely and calculated use of her diversity characteristic ("Muslim woman") helps her get ahead both socially and professionally.

Although she no longer wears the hijab, she is still a child of the Koran. She arranges discreet meetings with the imam of a mosque in Neukölln to get his advice. Her brothers are involved in clan crime – a detail she manages to keep under wraps.

During an official visit to Lebanon, she visits refugee camps from whence the German government takes in 5,000 people a month. Hussein would like to increase this monthly figure to 10,000 refugees. Muslim immigration increases her changes of electoral success.

Migrants are young, and laws have been put in place to make the most of their voting potential: in Schreiber's horror scenario, anyone aged 16 or over with a residence permit is allowed to vote. Germans over 70, on the other hand, have been disenfranchised.

The Germany where Sabah Hussein gets ahead and to which she came as a child refugee is a paradise for Muslims. The introduction of sweeping quotas has given them a massive leg-up in the workplace: in all companies, at least one in four staff members has to be a practising Muslim.

If this quota is not met, staff "without diversity characteristics" can be made redundant within six weeks. Other groups "with diversity characteristics" – such as people with "non-white skin pigmentation" (sic.), homosexuals and women – also benefit from the system. At an "Ecological Party" rally, a young man shouts into a megaphone: "Do you want absolute diversity?" The crowd answers with a predictable "Yes!" 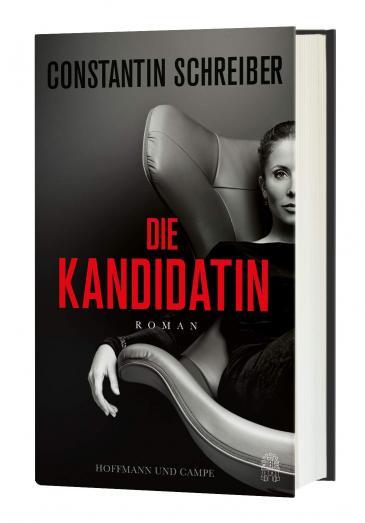 Narrative of a supposed "Islamisation": "There are no signs of satire in this trite, unambiguous text. It is the vision of the future of the man who wrote "Inside Islam". In articles that coincided with the publication of the novel, Schreiber explained that he wanted to imagine how the current situation could develop. According to the author, he adhered 'incisively' to reality and to current debates," writes Stefan Buchen in his review

To ensure there is no doubt in anyone's mind, Hussein goes one step further in an interview: yes, she confirms, "we want total diversity", adding that when she becomes chancellor she wants to round off the achievements of her party.

Privileged white districts, such as the affluent neighbourhoods on the banks of the river Elbe in Hamburg, have cut themselves off. Should she win the election, however, Hussein plans to settle immigrants in just this kind of affluent district, with the funding for such state programmes to be met by a "white tax".

There are no signs of satire in this trite, unambiguous text. It is the vision of the future of the man who wrote "Inside Islam". In articles that coincided with the publication of the novel, Schreiber explained that he wanted to imagine how the current situation could develop. According to the author, he adhered "incisively" to reality and to current debates.

"'Die Kandidatin' is an audacious, politically explosive novel of visionary relevance," writes the Hamburg-based publisher Hoffmann und Campe in its press release. Hoffmann und Campe has not responded to questions as to whether no one in the company had any reservations about publishing the text, for instance because of its inadequate literary quality.

Of course, both the publishing company and the author know that if push comes to shove, they can hide behind the veil of "fiction". After all, the book is just fantasy, maybe even art. As a precaution, Schreiber has made it known in interviews that he "overdrew" certain things in the book and that it contains "hints of satire".

Islamisation through the back door

But the veil of fiction is very flimsy. It is easy to see through and to behold the creeping islamisation of life in the Germany of the novel. In Chapter 10, for example, the streets of Berlin-Neukolln are blocked off on Fridays by men with "diversity characteristics" who are not members of the police force. In doing so, they make it possible for residents to pray on the road, men and women separated by the central reservation. As a man with an in-depth knowledge of Islam, Schreiber does not forget to add that they kneel down "in the direction of the Kaaba in Mecca".

"To prevent Germany from being ruled by an Islamist"

Then comes the point where a member of the federal police force has had enough. Taking matters into her own hands, she shoots Sabah Hussein, putting her in critical condition. The gunwoman, a blonde woman from the eastern part of the country, claims she is not alone, saying that so many of her fellow police officers had, like her, "seen through the political game that was being played."

In court, she openly admits to the shooting. When the public prosecutor asks her why she shot Sabah Hussein, she replies: "because I wanted to prevent Germany from being ruled by an Islamist."

"Why doesn't a so-called Christian party do anything about it? Why are young Germans fighting for the hijab, for Islamic Studies at school, for more mosques, more minarets, even more Muslims coming? We are heading straight for the precipice," she says in her defence. "This is not about diversity. No. This is about the takeover of our country!"

Denise Stein, the blond would-be assassin, is unlucky: the judge is a Muslim woman, who looks like "an Iranian woman in a chador" with her black robes and black hijab. Stein's application that the judge should be replaced on the grounds of bias is rejected. The court decides that the Muslim judge is particularly well suited to preside over this case, which is about "racism and a clear hate crime".

The would-be-assassin is sentenced; the injured victim and main character recovers. The story ends at 6 p.m. on the evening of the election shortly before the election result is announced. The candidate is in her office, where she unfurls a prayer rug and kneels down to pray. Sabah Hussein has already decided what she will say if she wins: "This is the dawn of a new Germany!"

One could, of course, ask how credible it is for a new news-reader on Germany's biggest prime-time news bulletin – a white man, incidentally – to "critically examine" the excesses of diversity policy. But this would appear to be of secondary importance. In terms of literary history, "Die Kandidatin" follows on from the widely read "trash novels" of 1920s and 1930s Germany, which also played on the fears and hatred of their readers and also warned of a "takeover of our country".

But this aspect does not feature in the reviews of and articles on Schreiber's novel. The book has been well received by a number of quality media, including the broadsheets "Tagesspiegel" and "Hamburger Abendblatt". "ZEIT", "WELT" and the "Berliner Zeitung" have all published interviews with the author. His marketing machine seems well oiled. Stories about the apparent decline and fall of the West do well.

For his part, Constantin Schreiber would have us believe that he wanted his novel to get people thinking and that it was also intended as a warning against right-wing extremism. Seriously.

Home
Print
Newsletter
More on this topic
The secularisation of Muslims: Silent withdrawalGermany′s Islam debate: For all our freedoms!Rafik Schami on integration: ″To the haters, they′re all faceless Muslims″ Repercussions of 9/11: The West and the Islamic world – mutually radicalised?
Related Topics
Book reviews, Criticism of Islam, Diversity, European Islam, Islam in Europe, Islam in Germany, Migration in Germany, Multiculturalism, Muslim associations in Germany, Muslims in the West, Right-wing populism
All Topics

Iranian artist Parastou Forouhar has lived in Germany since 1991. Full of rage, just like the protesters, she hasn't yet given up on the idea of justice. By Julia Hitz END_OF_DOCUMENT_TOKEN_TO_BE_REPLACED

Unflattering terms were used at a German Football Association human rights congress aimed at "intensifying the discussion" ahead of the World Cup. One speaker in particular made ... END_OF_DOCUMENT_TOKEN_TO_BE_REPLACED

Fariduddin Attar’s "The Conference of the Birds", one of the seminal works of Islamic mysticism, has recently been published in sumptuously illustrated German translation. It ... END_OF_DOCUMENT_TOKEN_TO_BE_REPLACED

Egyptian authorities have Mada Masr in their sights once again after critical reporting. But the editor of the country's last independent news source is adamant they will continue ... END_OF_DOCUMENT_TOKEN_TO_BE_REPLACED

Like Christianity, Europe's history is one of migration. Both have strong roots in the Orient and in cultures thousands of years old. Cultural historian Bernhard Braun invites us ... END_OF_DOCUMENT_TOKEN_TO_BE_REPLACED

END_OF_DOCUMENT_TOKEN_TO_BE_REPLACED
Social media
and networks
Subscribe to our
newsletter