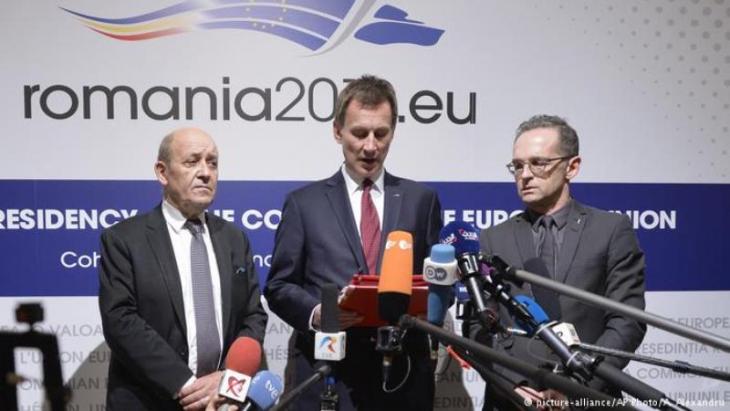 In an attempt to salvage the Iran nuclear deal, Germany, France and Britain recently set up a new vehicle of non-dollar trade with the Islamic Republic. The policy is diplomatically valid, but in economic terms it may well prove too little, too late. By Maysam Behravesh

The new vehicle is called the Instrument for Supporting Trade Exchanges (INSTEX). According to a joint statement of the foreign ministers of the three European countries (E3), INSTEX "will support legitimate European trade with Iran, focussing initially on the sectors most essential to the Iranian population – such as pharmaceutical, medical devices and agri-food goods".

The idea is to allow companies to do business with Iranian partners without using the U.S. dollar. The reason is that recently re-instituted U.S. sanctions do not only target Iran, but its international partners too. Not using the U.S. currency means circumventing U.S. sanctions. The E3 statement adds that "INSTEX aims in the long term to be open to economic operators from third countries who wish to trade with Iran".

It will take at least several more months to make INSTEX operational. The scheme is supposed to avert the risk of military confrontation, but it may prove too little, too late.

The background is that the multilateral nuclear deal – the Joint Comprehensive Plan of Action (JCPOA) – that was concluded in July 2015 has become extremely fragile. Back then, Iran agreed with Britain, China, France, Germany, Russia and the USA to curb its nuclear weapons programme in return for the lifting of international sanctions.

In May 2018, however, U.S. President Donald Trump pulled Washington out of the JCPOA. He argued that American interests and security were threatened because the deal covered neither Tehranʹs ballistic missile programme nor its "destabilising" behaviour in the Middle East.

It is actually not designed to do either, but the Trump administration adopted a policy of "maximum pressure" against the Islamic Republic. Some months after withdrawing from the nuclear deal, the USA re-imposed comprehensive economic sanctions on Iranʹs oil and banking sector.

In contrast to Washington, the E3 point out that Iran has fulfilled its nuclear-deal commitments. They want the agreement to last, but they have not managed to thwart the impact of U.S. sanctions. Major Europe-based corporations have responded to U.S. pressure by drastically reducing or even ending their business dealings with Iran. Examples include the oil giant Total, the shipping group Maersk, car manufacturers Daimler and Renault, railway company Stadler Rail and pharmaceuticals producer Sanofi. The mass exodus has left thousands of Iranians jobless.

Indeed, the sanctions are taking their toll in terms of reduced oil exports, rising unemployment and accelerating inflation. The nationwide pain has prompted widespread protests and strikes. Most of the people involved blame their economic plight on poor governance, mismanagement and rampant corruption.

Iran has withdrawn its participation in the Frankfurt Book Fair, accusing the event of meddling in the country's domestic affairs. Organisers have denied the accusation. By ... END_OF_DOCUMENT_TOKEN_TO_BE_REPLACED

Analyst Iyad El-Baghdadi examines the ongoing tensions between the United States and the two Gulf states – Saudi Arabia and the UAE – and their geopolitical implications in ... END_OF_DOCUMENT_TOKEN_TO_BE_REPLACED

From the Euphrates to the Mekong, dams that ensure one country's water supply risk leaving others parched. But shared water resources can be a source of peace as well as conflict ... END_OF_DOCUMENT_TOKEN_TO_BE_REPLACED

For over fifty years, British photographer Peter Sanders travelled across the Middle East and further afield, seeking out the saints of Islam. His work uncovers a little-known ... END_OF_DOCUMENT_TOKEN_TO_BE_REPLACED

END_OF_DOCUMENT_TOKEN_TO_BE_REPLACED
Social media
and networks
Subscribe to our
newsletter