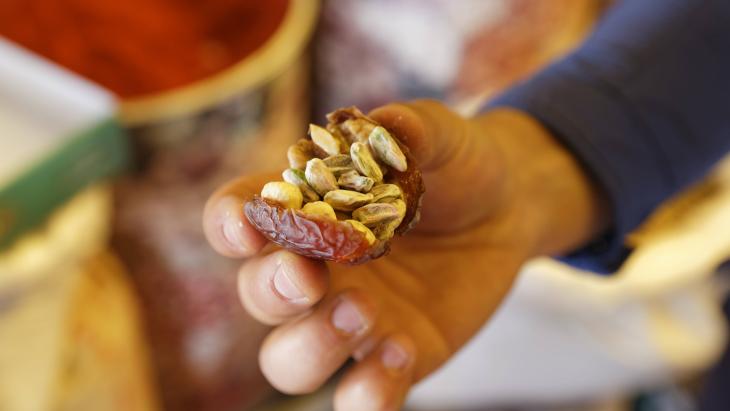 Gaziantep Academy of Culinary Arts
Baklava, but not for beginners

Ugur Acioglu proudly holds his city's cookbook in his hands. "A Taste of Sun and Fire" is the name of the colourfully illustrated volume. "Of Gaziantep's 500 recipes, it contains only 163," says Acioglu, chamber of commerce representative for the 600 restaurants in the city in south-eastern Turkey (population of over a million). The trade organisation was responsible for commissioning the book and publishing it in Turkish and English.

Acioglu learned how to cook from his father. He was seven when he first stood in the restaurant kitchen with him, every weekend and every week of the school holidays. He learned what his father had been taught by his own mother. In 1991, Ugur Acioglu took over the family restaurant and, with youthful zeal, initially tried his hand at catering. He quickly returned to what is the strength of Gaziantep's cuisine: slow food.

Fertile soil along the Silk Road

At that time, the city was making huge economic progress. Gaziantep left poverty behind earlier than other cities in Anatolia. Industrialisation began during the 1980s, making Gaziantep one of the oldest "Anatolian tigers" and bringing prosperity to many people. 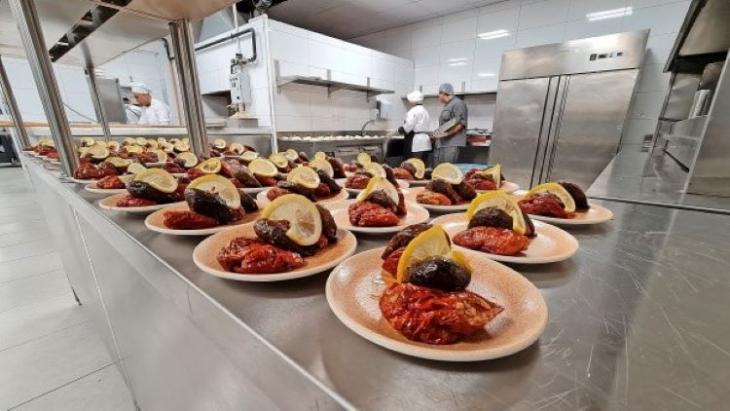 For the benefit of future generations: supported by the European Union, the Gaziantep Academy of Culinary Arts is formalising the training of cooks and pastry chefs. Courses range from the sustainable use of agricultural produce and food – "nothing should be thrown away," says Ugur Acioglu – to multi-course menus offered in the two adjoining training restaurants. Acioglu also hopes to attract restaurant managers and chefs from further afield to see how the animals are reared and slaughtered; how the meat is marinated; how kebabs are made and then baked in wood-fired ovens and over charcoal fires – and, crucially, how the tomato is used in local cuisine

This had its price. Few places in Anatolia and the entire Middle East are blessed with as fertile soil and such an ideal climate as the city in northern Mesopotamia. That explains Gaziantep's status as a staging post along the Silk Road. "But now the appreciation for agriculture began to decline," says Acioglu, "the quality of the produce became poorer, and even working in the restaurant business lost its appeal among young people."

Gaziantep had a reputation to lose: in Turkey, the city had always been considered a mecca for foodies. But now it lacked the skilled workers to prepare dishes such as baklava, its famous "nightingale's nest" dessert, and the many types of kebab and kofta. In the fledgling industrial city, people like Ugur Acioglu struggled to maintain a first-rate reputation. The chamber of commerce launched an initiative aimed at improving the quality of seed. A huge amount of effort went into distributing new supplies to growers and their village communities.

The fact that UNESCO rewarded Gaziantep was a psychological milestone. In 2015, the UN Educational, Scientific and Cultural Organisation added Gaziantep to its "Network of Creative Cities". As a result, the city has been able to benefit from cooperation with other cities with a flourishing gastronomy sector across five continents. In addition, "Gaziantep Baklava" is now registered with the EU as a geographically protected designation of origin.

"In the old days, every house had an orchard"

Acioglu and his team were now faced with the question of how to pass on the city's cooking heritage – handed down by mothers and grandmothers for centuries – to future generations. Supported by the European Union, they have recently founded the "Gaziantep Academy of Culinary Arts", formalising the training of cooks and pastry chefs. 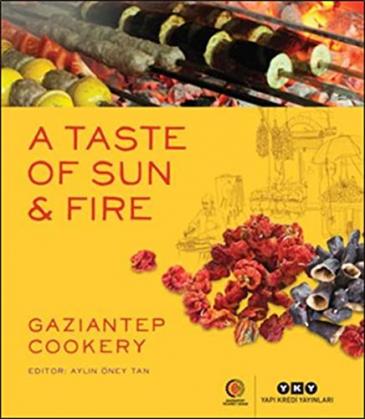 Showcasing Gaziantep’s culinary heritage: the region in southeast Turkey is famous for the quality of its grapes and quinces, its vegetables and spices, such as red chilli peppers. Other premium-grade local products – flour, pistachios and buffalo milk – go to make up baklava, that most famous of all Turkish desserts

In the first cohort, 50 young Turks are to receive 18 months of training from top chefs and pastry chefs. "For the city's gastronomic needs," says Acioglu. Courses range from the sustainable use of agricultural produce and food – "nothing should be thrown away," says Acioglu – to multi-course menus offered in the two adjoining training restaurants. And there's more. The academy is set to grow. Acioglu hopes to attract restauranteurs and chefs to their courses in Gaziantep from other areas of Turkey and from abroad. They should see how the animals are reared and slaughtered; how they are marinated; how kebabs are made and then baked in wood-fired ovens and over charcoal fires – and how the tomato is used in local cuisine.

The tomato is particularly central. "It has only been part of our cuisine for a century," says Acioglu. For years it was merely used to feed livestock. "Until the French occupiers introduced us to the tomato after the First World War." The local population put up such a heroic resistance during hostilities that the founder of the Republic, Ataturk, bestowed the honorary title Gazi, "warrior", on the city of Antep, renaming it Gaziantep. Yet little remains of the former idyll. "In the old days, every house had an orchard," Acioglu recalls.

The quality of the local grapes and quinces was well known. What set it apart from other regional cuisines was the quality of the vegetables, such as aubergines, and spices, such as the red pepper. In Gaziantep's bazaar, the colours of the spices are still a feast for the eyes, and the fragrance is beguiling. Finally, the interplay of premium-grade local products – flour, pistachios and buffalo milk – resulted in baklava, the most famous of all Turkish desserts.

"In Gaziantep, gastronomy is also synonymous with festivals, intercultural dialogue and social cohesion," UNESCO writes in its verdict. Acioglu explains: "In the past, the city was a maze of cul-de-sacs, and in each cul-de-sac doors opened into a dozen houses." If a house received a visitor, the neighbours would gather there. Turks, Armenians and Jews cooked together, mothers found daughters-in-law, the elders looked after the youngsters, gave them advice and motivated them.

That is history. But it lives on in the city's soup kitchens. A new layer is being laid over the long history of the city in this blessed corner of Mesopotamia, inhabited for millennia by Hittites, Arabs, Turks. "Every civilisation had its dishes that it passed on." That's why Acioglu is not only proud of his cookbook and the academy he has co-founded. He is especially proud of the diversity of his city's dishes, which is unique, at least in Turkey.

Home
Print
Newsletter
More on this topic
Interview with Zafer Yenal: On the connection between nationalism and cuisineEU accession: Turks troubled by possibility of tripe banErdogan, Islam and alcohol: Last call for Istanbul's meyhane bar culture?
Related Topics
Antiquities and historical monuments, Cuisine, Dialogue of Cultures | Intercultural Dialogue, History of the Near and Middle East, Islamic lifestyle, Tourism
All Topics

Recent efforts to rehabilitate Assad are setting a damaging precedent for accountability, just as the international community is expressing the need to hold Russia to account for ... END_OF_DOCUMENT_TOKEN_TO_BE_REPLACED

With reported hostilities against Israeli journalists and the flag of the Palestinian territories flying on the streets and in the stadiums, it is clear the World Cup in Qatar is ... END_OF_DOCUMENT_TOKEN_TO_BE_REPLACED

Past attempts to reconcile logic and belief within Islam tend to be dismissed today – not because they lack merit, but because they were politically defeated, argues Mustafa Akyol END_OF_DOCUMENT_TOKEN_TO_BE_REPLACED

When is it and when is it not acceptable to display a political banner at the World Cup in Qatar? The answer seems to depend largely on the political message, with fans ... END_OF_DOCUMENT_TOKEN_TO_BE_REPLACED

Nouara may be 65, but she is ready to join thousands of others who burn their ID and pay traffickers for the chance of a new life in Europe. Zineb Bettayeb reports END_OF_DOCUMENT_TOKEN_TO_BE_REPLACED

END_OF_DOCUMENT_TOKEN_TO_BE_REPLACED
Social media
and networks
Subscribe to our
newsletter