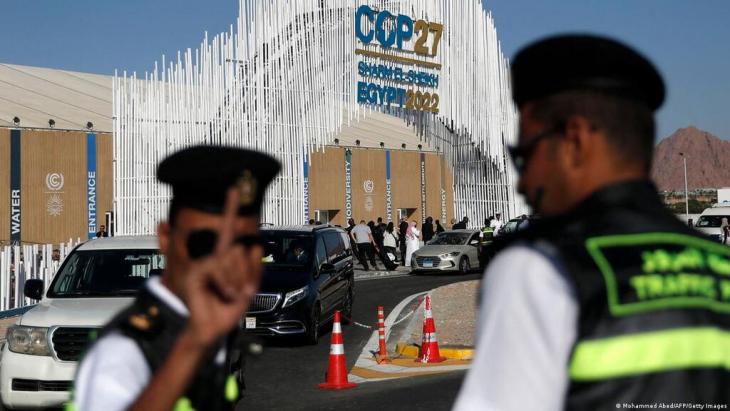 COP27 in Sharm el-Sheikh is turning into a PR disaster for Egypt’s military regime. Instead of praise for the host, the news is full of solidarity for imprisoned activist Alaa Abdel Fattah and criticism of the event’s grotesque surveillance measures. By Sofian Philip Naceur

"No climate justice without human rights", "Freedom for all political prisoners", or "Freedom for Alaa": to the visible discontent of Egypt’s authoritarian military regime, it was slogans like these that dominated the first week of the UN Climate Change Conference COP27 in the Egyptian resort of Sharm el-Sheikh, rather than reports of a successful start of the conference or progress made in negotiations on measures to limit global warming.

Never before has international coverage of the annual climate summit focused so extensively on the human rights situation in the state hosting the mega event. And rarely has a regime presented itself to the world so unambiguously for what it is: a paranoid and authoritarian police state that does not even shy away from clumsily and systematically spying on participants of a UN summit.

Egypt’s government intended to use the COP27 to present itself as a professional host country, to promote South Sinai as a venue for major international events and to attract green investments. However, in the run-up and at the beginning of COP27, Egypt was predominantly the subject of reports about mass arrests, a hunger-striking political prisoner, paranoid police controls, excessive surveillance measures around the venue of the climate conference, and the unsustainable energy and urban development policies of President Abdul Fattah al-Sisi’s regime.

For months, Egyptian government officials and media affiliated to the state had done everything to play down the systematic human rights crimes committed by authorities and to pretend that the regime was seriously interested in a change of course regarding environmental and climate-related policies. 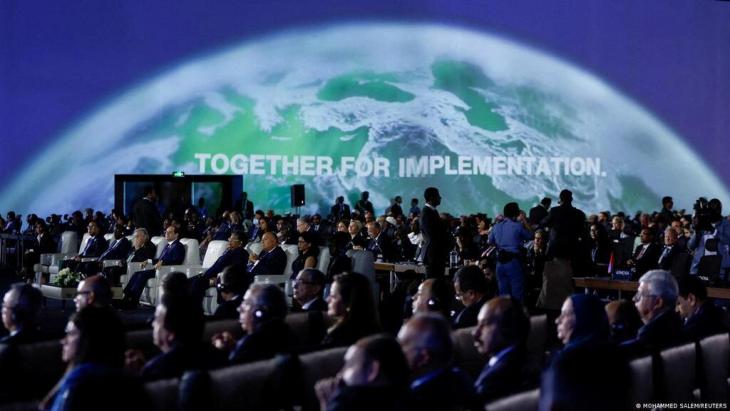 Greenwashing fail: Egypt’s government intended to use the COP27 to present itself as a professional host country, to promote South Sinai as a venue for major international events and to attract green investments. However, in the run-up and at the beginning of COP27, Egypt was predominantly the subject of reports about mass arrests, a hunger-striking political prisoner, paranoid police controls, excessive surveillance measures around the venue of the climate conference, and the unsustainable energy and urban development policies of President Abdul Fattah al-Sisi’s regime

With little success, as opposition figures, government critics and human rights groups have succeeded both in exposing the Egyptian government's sometimes clever, sometimes clumsy attempts at greenwashing and in drawing media attention to the disastrous situation in Egypt's prisons.

Hunger strike as a last resort

Much of the focus has been on British-Egyptian activist Alaa Abdel Fattah, detained almost continuously since 2014. Imprisoned on flimsy charges, the 40-year-old had already gone on partial hunger strike in April to protest against his prison conditions and for the release of other political prisoners.

After 218 days of refusing food and coinciding with the start of the COP27, he escalated his strike on 6 November and refused to drink water for a week.

Although Abdel Fattah has since ended his water strike, his family continued to warn that he could die as a result of his protest during the conference, a scenario that Egypt’s government is desperate to prevent. The detrimental effect on the image of the regime and Egypt as conference host would be too severe.

Whether prison authorities actually force-fed him, as reports suggest, remains unclear. However, an immediate release of Abdel Fattah, as called for by solidarity campaigns, activists, human rights defenders and now also by European governments, appears increasingly unlikely. The regime’s reactions to the campaigns have been too vehement and, unfortunately, all too familiar.

Both the reports about Abdel Fattah being force-fed and the verbal attack by an Egyptian MP loyal to the regime on his sister Sanaa Seif at a press conference in Sharm el-Sheikh, as well as a statement by Egypt’s Permanent Mission to the UN in Geneva addressed to the UN Human Rights Council indicate the regime is playing for time. Last week’s demand by UN Human Rights Commissioner Volker Turk to have the activist, convicted in an “unfair trial”, finally released, was brusquely dismissed as an “unacceptable insult” by Egypt’s government.

An end to the silence

Abdel Fattah’s hunger strike and the vocal campaigns calling for the release of political prisoners in Egypt have nevertheless brought the climate and human rights movements closer together, leading to a more holistic drafting of demands. Human rights violations by the Egyptian authorities have not been so prominently discussed in public since Sisi’s bloody military coup in 2013. That that the climate movement afforded more space to human rights demands in the run-up to COP27 also helped.

That’s why Hossam Bahgat, director of the human rights group Egyptian Initiative for Personal Rights, said: “COPs should go wherever civil society needs to be seen and heard. UN summits must not only be hosted in democratic countries. They can be turned into resistance spaces”, the human rights defender stressed on Twitter.

While press conferences, panel discussions and protests at the conference site in Sharm el-Sheikh have indeed provided occasions at which, for the first time in years, outspoken criticism of Egypt’s military regime could be voiced in Egypt itself, the headlines have been dominated by reports about the conditions in Egyptian prisons, the estimated more than 65,000 political prisoners, the severe restrictions on freedom of expression and assembly, or the recent nationwide arrest campaign against hundreds of people after dubious calls for anti-government protests were launched for 11 November.

COP27 participants, meanwhile, were made firmly aware during the conference’s first week of the authoritarian context in which this year’s climate summit is taking place. The sometimes urgent warnings to official delegations, environmental NGOs and climate activists about possible surveillance measures by Egyptian police and intelligence services, both known for being extremely paranoid, were no exaggeration

Even before the start of COP27, there were serious warnings about bugged cabs, possible searches of hotel rooms and against downloading the official COP27 app. Once installed, the app requires access to user emails, GPS data, photos and more. These could all be used by the Egyptian government as a means of comprehensively monitoring the respective smartphones, warned British newspaper The Guardian, among others, referring to initial investigations of the app by Amnesty International and Human Rights Watch.

Meanwhile, Sharm el-Sheikh and the conference centre are reportedly swarming with security personnel and plain-clothed police officers. Yet there was more to Egypt’s surveillance measures than simply spying on delegates attending the conference.

After an Indian activist was detained last week while trying to walk from Cairo to Sharm El-Sheikh to draw attention to the climate crisis, the authorities also denied a staff member of a Danish human rights organisation entry into Egypt.

The question for Egypt's civil society, human rights activists and imprisoned political prisoners is what will happen to human rights in the country once the COP and the massive international attention are over. As reported by the Cairo Institute for Human Rights Studies, several political prisoners released in 2022 as part of a slow-moving wave of releases were threatened with re-arrest after the COP. Accordingly, the situation for politically involved people in Egypt is likely to remain tense once the UN summit is over.

Jonas Poher Rasmussen's Oscar-nominated animated documentary “Flee” focuses on the life of a refugee from Afghanistan. Based on a true story, it centres around the question: when ... END_OF_DOCUMENT_TOKEN_TO_BE_REPLACED

"Flugt" is the world's first museum dedicated to the stories of those forced to flee. The new museum, which focuses on the fates of refugees then and now, is housed in a former ... END_OF_DOCUMENT_TOKEN_TO_BE_REPLACED

Hamburg lawyer Eugen Balin is a member of the World Jewish Congress' Jewish Diplomatic Corps. At the end of 2021, a delegation of the Corps visited the United Arab Emirates, which ... END_OF_DOCUMENT_TOKEN_TO_BE_REPLACED

India is not alone in feeling great sadness today over the death of renowned Reuters photojournalist Danish Siddiqui. He was killed in Afghanistan during clashes between Afghan ... END_OF_DOCUMENT_TOKEN_TO_BE_REPLACED

By stage-managing his re-election in a poll widely dismissed as a farce, Syria's President Bashar al-Assad has killed two birds with one stone: he has forced his compatriots to ... END_OF_DOCUMENT_TOKEN_TO_BE_REPLACED

END_OF_DOCUMENT_TOKEN_TO_BE_REPLACED
Social media
and networks
Subscribe to our
newsletter